skip to main | skip to sidebar

Tuesdays. The days before the madness day.

Tuesdays have always been one of the weirdest days working for the paper. The calm before the storm of production day.

Six years ago.. when I joined on, it was just hectic. you had a newspaper full of lifers that, aside from J and myself, had never really worked for another newspaper or publication, so they were really used to the idea that if an advertiser came in, blissfully ignorant of, or arrogantly immune to deadlines, they would accommodate. "the client is always right. even when they were wrong", was the motto.

It took me 2 and a half years to shoot that motto down in the face of getting productivity increased and press deadlines hit on time. and by "on time", I mean 4 hours after when they were supposed to be met.

Let me explain a bit. We are a weekly.. and come out on Thursday morning, and this newspaper has had this schedule since 1971. without ever ONCE, missing a press run.

1971. That predated your fucking i-phone, and it predates computer aided digital typesetting, and had a fuckload to do wiyth typeriters and storyboards and waxers and manual paste-ups that were sent down to the press by courier. This is one of the reasons I wanted to work for this newspaper. well.. That and the fact that they didn't throw me out when I showed up for the interview after a 3 JD on the rocks lunch, that they had rescheduled 3 timed over 4 months. I figured I really didn't have much to lose as I had my shit packed to more to Burlington in search of Advertising work once more.

For good or ill.. they recognized the talent. a bit insane perhaps, defiantly steeped in alcohol, but a talent for cutting through the bullshit, defining time-saving processes, and more importantly, trying to instill a sense of discipline on advertising clients that before my arrival, were treated like ignored , hungry children on Ritalin at an Arby's.

of course it took me over 4 years to do that subtly. imagine steering the queen Mary with a couple of Oars and a bottle rocket.. it would be faster.

Six years ago, we were still building ads on a Wednesday production deadline and not getting out until 11pm.

Years , and recession later, Between J and I we have cut the time for ad production in half, keeping ad builds to Monday at noon at the latest, and making sure that the blame for getting a paper out the door past 6pm on any given Wednesday would never fall on The Advertising Department. (we prefer to blame editorial for that ;)

My Hours have changed. no longer can I have overtime, Benefits cut. No more Wednesday massages, and no more late night Fridays at the bar with hookers and blow. but alas.. to make up for the extra money that I was making, I am given 3 day weekends. The recession has taken about a third of what I was making, mostly due to my efficiency.

but.. well.. at least I am still employed, and I don't have to go back to diving the snarling agency cesspool of my youth.

Being poor may indeed suck.. but being being rich and miserable sucks even more.

Posted by Unknown at 6:08 PM No comments:

a revival of blogging.

I think i finally found A place where nobody looks. Ia place where I can actually write, without fear of psychosis reply's from weird and strange people. 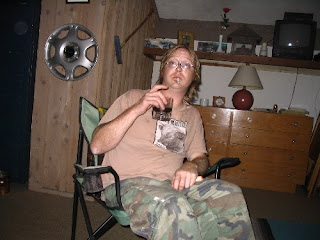 My skirmish with the woodchuck continues. I saw him today.. continuing to dig the hole it started before I ripped the woodpile out. I had the 9 cocked and trained. it just looked at me, with that cute little nose twitching. I couldn't pull the trigger. Instead I gave it a very stern lecture on eating other peoples hard fought crops. he rubbed his whiskers and nodded, but I really don't know if he was just snowing me. I uncocked the 9 and went away.. wagging my finger over my head. There is a reason I keep dropping Facebook. actually.. a lot of fucking reasons. First of all, its an evil bloodsucking whore.. or are those 3 reasons? Facebook is a drug. it really is and you know it. A while back, say 6 years ago, we didn't have it. and it was an insidious technological pill you were given.. thinking " Hey.. what the fuck? its what all the cool kids are doing!".. We even made a generational push. we were not able to get your parents to do a line of coke, but oddly enough, you got your mom on facrbbook. Way to fucking go. A LONG time ago.. we didnt have this. This Social networking. and , I must say, I was the happier for it. I never had someone I hadnt seen in 3 years, who is currently fucking my buddies ex wife, comment on my morning coffee post. Nor should she. Fucking seriously. this shit has gotten out of hand, and if you dont see it, then you are really part of the problem. I am pushing 50. and I am cool with this. I am also cool with the fact that I no longer want to have 129 email messages, informing me of replies on posts, friend requests from people I have no real interest in and scream-fests on political shit I no longer care about. I am pretty much done with this.
Posted by Unknown at 6:40 PM No comments:

Posted by Unknown at 6:47 AM No comments:

Hello from the Road

My buddy from Iraq.. Justin.

Posted by Unknown at 6:31 AM No comments:

Posted by Unknown at 7:56 PM No comments:

OOh Man I totally forgot about this. Heres one fo da GEEKS!

Posted by Unknown at 8:37 PM No comments:

See more funny videos at Funny or Die
Posted by Unknown at 7:05 AM No comments: 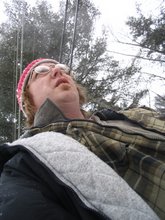 why? I dont know